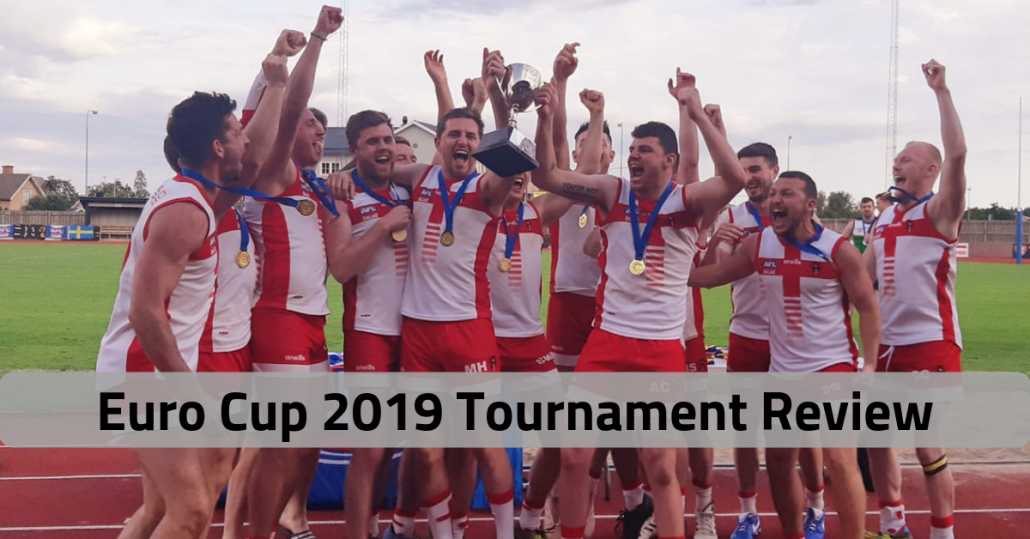 With over 350 players as well as coaches, team staff, volunteers, umpires, family and friends, the Norrtajlie Sportcentrum was packed out by the AFL Europe community with a great turnout from the locals.

It all came down to the two Grand Finals which saw England and Ireland go head to head in both the men’s and women’s finals.

In the women’s, it was the Irish Banshees who proved to be the best team as they secured back to back Euro Cups, defeating the England Vixens by 30 points after a strong second-half performance.

Over in the men’s, the tables were turned as the England Dragonslayers won another Euro Cup to add to their previous success in the tournament by defeating the Irish Warriors by seven points in an even contest where the key difference was converting forward-50 entries to scores.

In Pool A, Ireland was looking to finish top of their group, and they did just that winning all three games, with an impressive average winning margin of 78 points in their group games. In their semi-final, Ireland only conceded one goal against Sweden as their outstanding form continued. Against rivals, the England Vixens, in the Grand Final, the game was tight at the start, but Ireland’s fitness and ball skill were key to their 30 point victory as they lifted the Euro Cup for the second year in a row.

The German Eagles were hoping to improve on last years result and they managed to achieve just that in their second ever appearance as a national team. They won two of their pool games, against Wales and Croatia, before reaching the semi-final where they fell short against the England Vixens by just five points in one of the most thrilling matches of the day. They then played Sweden for third place and won as the Eagles secured a bronze medal for 2019.

Wales opened their Euro Cup campaign with a fantastic 14 point win over the Croatian Queens, but couldn’t match the strength of Germany and Ireland in their next two group games. In the Bowl semi-final, the Welsh produced an impressive performance against Switzerland, winning by 10 points. In the Bowl Cup final, the Welsh fell short against a strong French side, as Wales finished the tournament in sixth place.

The Croatian Queens started off their 2019 Euro Cup in an entertaining game against Wales, but they fell short by 14 points in the end. In their next two games, they battled hard but injuries hampered their effort and tested their depth as they were defeated by Germany and Ireland. They played France in the Bowl Cup semi-final and despite being close early, lost by 39 points. In the battle for the seventh place, the Swiss prevailed as the Croatian’s finished in eighth place.

Over in Pool B, England Vixens were excellent in defence as they only conceded two goals on their way to finishing on top of their pool. In the semi-final against Germany, which went down to the final seconds, the Vixens managed to hold on by five points to book a place in the Grand Final. Against Ireland, the Vixens battled hard but couldn’t match the skill of the Irish, coming away from the tournament with another silver medal.

The hosting Swedish Ravens finished second in the group after close wins over France and Switzerland before losing out to England in their final pool match. In the semi-final, the Swedish faced the in-form Banshees, losing the semi but with the chance to still win a medal. Against Germany, the hosts challenged the Eagles but ultimately lost as they finished fourth in the competition.

France started off slowly in the group stage, losing to England and Sweden but bounced back well to win against the Swiss before winning their Bowl semi-final in style against Croatia. Up against Wales, the French showed their quality with the ball as they finished the tournament as Bowl winners with a 14-point win and finished in fifth place.

Despite not winning a game in their pool, the Swiss proved to be tough opposition in their inaugural tournament as they challenged Sweden and France in two close games. In the Bowl semi-final, they couldn’t keep up with a fast Welsh team, losing by 10 points in another close match. Playing Croatia in the battle for seventh place, the Swiss finished off strong with an impressive 16-point win.

In Pool A of the men’s draw, the German Eagles began with two comprehensive victories before a tight eight-point win over Croatia saw them finish the group stage undefeated. In the quarterfinals, they comfortably beat Wales, but couldn’t match the strength of England, losing by just 13 points in the semi-final. Up against France in the battle for third place, Germany secured their second bronze medal of the tournament in a close six-point win.

Finishing second in Pool A, the Croatian Knights secured comfortable wins against Austria and Finland but lost out to an in-form Germany. In the quarters, they were defeated by the impressive Irish side but bounced back well to win their semi-final against the Netherlands. Against the hosts, Sweden, for fifth place, the Knights lost by just 10 points to finish the competition in sixth.

After a tough start with two losses in a row, Austria bounced back well against Finland. Despite having many shots on goal, Austria lost their quarter-final against the Czech Republic. In the semi-final, they were defeated by an impressive Israel team before Austria finished off their campaign on a positive note with a good win against Poland as they finished 15th.

In their first Euro Cup since 2013, Finland found it tough early losing their three pool games and the quarter-final against Switzerland. They finally got their reward for effort in their win against Poland with a 23-point win, before being defeated by Israel as the Finnish side concluded their first Euro Cup tournament in six years in 14th position.

France was the dominant team in Pool B, conceding just two goals as they went on to win all three games in a comfortable manner. They then went on to win their quarter-final by 30 points against the Netherlands but lost to the strong Ireland side in the semi-final. In a tight contest for bronze, the French lost by just six points to the Germans as France finished in 4th place.

The host team, Swedish Elks, beat Scotland and Russia but lost to France in the group stage. Following that, they were defeated by a dominant England side in the quarter-finals. However, the hosts went on to win an enthralling contest by seven points against Wales in the semi-final. They then won an entertaining final against Croatia to be crowned the Bowl Champions and come away with a 5th place finish in their home tournament.

Scotland started off positively with a win against Russia but lost to both Sweden and France in their group. They won their quarter-final in convincing fashion against Poland and also won their semi against Switzerland. In a replay of their first game, the Scottish won against Russia with a bright performance to finish the Euro Cup as Plate Champions, finishing ninth overall.

Despite a tough start, losing their group games, Russia hit form in the finals, beating Israel in the quarter-final and the Czech Republic in the semi. Up against their opponents from their first Pool B game, Russia put up a good fight but just fell short against Scotland as they finished in 10th place, illustrating the fantastic improvement in the Russian team.

The eventual Euro Cup champions, the England Dragonslayers, won all their pool games convincingly by an average margin of 58 points. A big win in the quarter-final saw them move to the semi’s where they defeated Germany by 13 points in their closest game to date. In the Grand Final against Ireland, the Dragonslayers were more clinical in front of goal as they became the 2019 Champions after a narrow seven-point victory.

Finishing second in the pool, the Netherlands started off with two important wins but went down to England in their final group match. They then lost to France in the quarterfinals and to Croatia in the semi-finals. In the 7th Place play-off against Wales, the Welsh side was too strong as the Netherlands ended their tournament in eighth place.

A tough start against England and the Netherlands, Israel defeated Poland in an impressive 40-point win to finish their group games. The quarter-final game against Russia was close, but Israel lost by just seven points. In the semi-final, they defeated Austria after a great defensive display, conceding just a point, before defeating Finland to end their tournament in 13th place.

Eventual runners-up, Ireland, topped their group comfortably on their way to the final. They had another big win in the quarter-final against Croatia by 59-points. Another strong performance in the semi-final against France helped them continue their form going into the Grand Final. Coming up against rivals England, they couldn’t keep that form up all the way through, as they lost in a close game by just seven points to finish with the silver medal.

Starting off with two wins, Wales were looking strong early before losing to Ireland in their last group game. They were then defeated by Germany in the quarter-finals and lost the semi-final against the hosts Sweden. In their final game, they finished with a good win over the Netherlands by 35 points in a great attacking display as they finished the tournament in seventh place.

A close loss to Wales to start their campaign, Switzerland then lost to the in-form Irish team but finished off the group strongly with a win over the Czech Republic. In their quarter-final, they won by 28-points against Finland but were defeated by Scotland in the semi. In the battle for 11th place, the Swiss team beat the Czech Republic again, this time by 23 points to finish in 11th spot.

The Czech Republic had a tough group stage, losing all their games, but their form took a turn for the good as they beat Austria in their quarter-final by nine points. They fought valiantly in the semi-final against Russia but ultimately lost before they played Switzerland for the second time in the 11th placed play-off. This game was closer than the group match, but the Czech team lost by 23 points as they finished in 12th place.

Men’s Team of the Tournament:

Thank you to everyone for their support and effort in making this year’s Euro Cup a memorable event. A massive thank you and mention to the umpiring squad for 2019, with a total of 13 umpires covering 68 matches. Thank you for an outstanding effort and your contribution on the day.

A big thanks must be said to AFL Sweden for their amazing management of this event in conjunction with the team at Norrtalje Sportcentrum for hosting us.

We applaud all the volunteers and pitch managers for keeping the day running on time and for their support of the game in Europe.

We would also like to acknowledge the Second Secretary of the Australian Embassy in Sweden, Sara-Kate Goltz-Wharton and Staffan Tjornhammar the Norrtalje Municipal Commissioner for coming along and supporting this fantastic event.

To all of the teams, players and coaches, congratulations on an amazing tournament played in great spirit both on and off the field, you all represented your nations with pride.